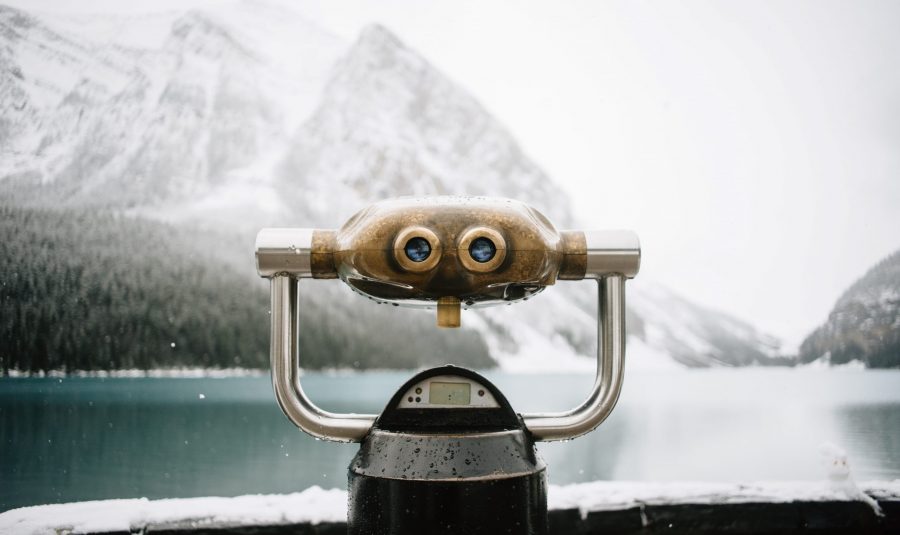 Don’t Give Up – A Glimpse Behind the Scenes

Do you wonder whether the things you say to people about the Lord are doing any good?

Thomas grew up in one of the roughest cities in America. Violent and angry, he joined the military looking for independence. Instead he learned some discipline and skills that helped him succeed as a civilian defense contractor after his injury-related discharge.

During this time, he met a family who had hoped to find utopia in the Islamic country they’d become citizens of. Disillusioned with the disaster they found themselves in, they asked Thomas a simple question.

“How do you become a Christian?”

Thomas says, “When those people asked me the question, I knew the answer. I had a very godly great-grandmother that taught me my responsibility to Jesus Christ, and it seemingly fell on deaf ears.”

But he’d heard her words even if they hadn’t seemed to impact him. When that family asked Thomas, “How do you become a Christian,” he had an answer ready.

“Well, you trust in the death, burial and resurrection of Jesus.”

In fact, his answer was so ready they asked him, “Oh, is that what you did?”

When he got back to the villa, he opened his Bible and read Romans 5:1-6 over and over again.

Therefore being justified by faith, we have peace with God through our Lord Jesus Christ: By whom also we have access by faith into this grace wherein we stand, and rejoice in hope of the glory of God. And not only so, but we glory in tribulations also: knowing that tribulation worketh patience; And patience, experience; and experience, hope: And hope maketh not ashamed; because the love of God is shed abroad in our hearts by the Holy Ghost which is given unto us. For when we were yet without strength, in due time Christ died for the ungodly. Romans 5:1-6

Before their question, he’d never considered that you had to become a Christian. If anything, he’d assumed that he was one because he’d grown up in the south. But now he came face to face with the reality that he was angry, miserable, and empty. He wanted what Romans 5 offered.

After a couple of weeks of struggling with what he would have to leave behind if he became a Christian and listening over and over and over again to a sermon on salvation, he says,

“I finally trusted in the Lord Jesus Christ and gave my life over to Him.”

Glory Hallelujah! Today he’s on deputation and headed to the mission field.

What if his great-grandmother had given up because he was so hardened and angry? What if she’d left him to himself?

I’ve heard about a man who stood at the same street corner every day for thirty years asking a simple question. I can’t recall exactly what he would ask – something like, “Are you sure you’re on your way to heaven?”

What stood out to me about his story was that for thirty years he never knew if his work was making a difference. He didn’t hear about one soul that had been converted because of his faithful witness. Still, he kept at it day in and day out asking that brief question to everyone he could.

After thirty years, a man approached him. When the evangelist asked his question, the stranger replied that yes, he knew for sure he was on his way to heaven. He added that it was because two decades earlier as he’d walked around that same corner while on business in Sydney, he’d been asked that question. For days afterward the question had haunted him in every quiet moment until he found the gospel – and God had gloriously saved him. After all those years he was back and was delighted to find the man still at his post so he could say thank you.

Are you willing to be a witness even when you can’t see the results?

When there isn’t any evidence that our witness is making a difference, God’s promises sustain and motivate us. As Galatians 6:9 reminds us, we have too much at stake to give up.

And let us not be weary in well doing: for in due season we shall reap, if we faint not.

Here are some of the things God has promised:

For as the rain cometh down, and the snow from heaven, and returneth not thither, but watereth the earth, and maketh it bring forth and bud, that it may give seed to the sower, and bread to the eater: So shall my word be that goeth forth out of my mouth: it shall not return unto me void, but it shall accomplish that which I please, and it shall prosper in the thing whereto I sent it. Isaiah 55:10-11

For the word of God is quick, and powerful, and sharper than any twoedged sword, piercing even to the dividing asunder of soul and spirit, and of the joints and marrow, and is a discerner of the thoughts and intents of the heart. Hebrews 4:12

2.     He Will Reward Faithfulness

His lord said unto him, Well done, thou good and faithful servant: thou hast been faithful over a few things, I will make thee ruler over many things: enter thou into the joy of thy lord. Matthew 25:21

I have fought a good fight, I have finished my course, I have kept the faith: Henceforth there is laid up for me a crown of righteousness, which the Lord, the righteous judge, shall give me at that day: and not to me only, but unto all them also that love his appearing. 2 Timothy 4:7-8

3.     He Doesn’t Hold Us Accountable for Results

I have planted, Apollos watered; but God gave the increase. So then neither is he that planteth any thing, neither he that watereth; but God that giveth the increase. 1 Corinthians 3:6-7

So thou, O son of man, I have set thee a watchman unto the house of Israel; therefore thou shalt hear the word at my mouth, and warn them from me. When I say unto the wicked, O wicked man, thou shalt surely die; if thou dost not speak to warn the wicked from his way, that wicked man shall die in his iniquity; but his blood will I require at thine hand. Nevertheless, if thou warn the wicked of his way to turn from it; if he do not turn from his way, he shall die in his iniquity; but thou hast delivered thy soul. Ezekiel 33:7-9

4.     He Wants to Save People More Than We Want Them to Be Saved

Say unto them, As I live, saith the Lord GOD, I have no pleasure in the death of the wicked; but that the wicked turn from his way and live: turn ye, turn ye from your evil ways; for why will ye die, O house of Israel? Ezekiel 33:11

The Lord is not slack concerning his promise, as some men count slackness; but is longsuffering to us-ward, not willing that any should perish, but that all should come to repentance. 2 Peter 3:9

Who will have all men to be saved, and to come unto the knowledge of the truth. 1 Timothy 2:4

For God so loved the world, that he gave his only begotten Son, that whosoever believeth in him should not perish, but have everlasting life. John 3:16

5.     Our Witness Is His Chosen Way to Call People to Salvation

And all things are of God, who hath reconciled us to himself by Jesus Christ, and hath given to us the ministry of reconciliation; To wit, that God was in Christ, reconciling the world unto himself, not imputing their trespasses unto them; and hath committed unto us the word of reconciliation. Now then we are ambassadors for Christ, as though God did beseech you by us: we pray you in Christ’s stead, be ye reconciled to God. 2 Corinthians 5:18-20

With those promises to count on, our commission is clear:

Let your light so shine before men, that they may see your good works, and glorify your Father which is in heaven. Matthew 5:16

And Jesus came and spake unto them, saying, All power is given unto me in heaven and in earth. Go ye therefore, and teach all nations, baptizing them in the name of the Father, and of the Son, and of the Holy Ghost: Teaching them to observe all things whatsoever I have commanded you: and, lo, I am with you alway, even unto the end of the world. Amen. Matthew 28:18-20

But ye shall receive power, after that the Holy Ghost is come upon you: and ye shall be witnesses unto me both in Jerusalem, and in all Judaea, and in Samaria, and unto the uttermost part of the earth. Acts 1:8

God gives us many examples of faithful witnesses in the Bible. Two of my favorites are Stephen and Paul.

They chose Stephen, a man full of faith and of the Holy Ghost… And Stephen, full of faith and power, did great wonders and miracles among the people. Then there arose certain of the synagogue, which is called the synagogue of the Libertines, and Cyrenians, and Alexandrians, and of them of Cilicia and of Asia, disputing with Stephen. And they were not able to resist the wisdom and the spirit by which he spake. Acts 6:6, 8-10

Stephen died a martyr’s death because of his bold witness to seemingly hard hearts, but God tells us that there is a connection between his death and the salvation of a young man, Saul, who became Paul the apostle.

Paul had such a vision for sharing the gospel that he witnessed everywhere he was – in places of worship, in markets, while under arrest, in court, in jail.

One time the results of his bold witness were dramatic:

And at midnight Paul and Silas prayed, and sang praises unto God: and the prisoners heard them. And suddenly there was a great earthquake, so that the foundations of the prison were shaken: and immediately all the doors were opened, and every one’s bands were loosed.

And the keeper of the prison awaking out of his sleep, and seeing the prison doors open, he drew out his sword, and would have killed himself, supposing that the prisoners had been fled. But Paul cried with a loud voice, saying, Do thyself no harm: for we are all here.

Then he called for a light, and sprang in, and came trembling, and fell down before Paul and Silas, And brought them out, and said, Sirs, what must I do to be saved? And they said, Believe on the Lord Jesus Christ, and thou shalt be saved, and thy house. And they spake unto him the word of the Lord, and to all that were in his house. And he took them the same hour of the night, and washed their stripes; and was baptized, he and all his, straightway. Acts 16:25-33

Is there someone in your life who seems hardened to the gospel? Are you struggling with not being able to see results from your witness for the Lord Jesus? Don’t give up!

Is there a Thomas in your life? If you keep living out your faith and speaking for the Lord when you can, you never know when the Lord may open their heart to the truth.

Will you commit with me to keep sharing the gospel even when you can’t see the results?